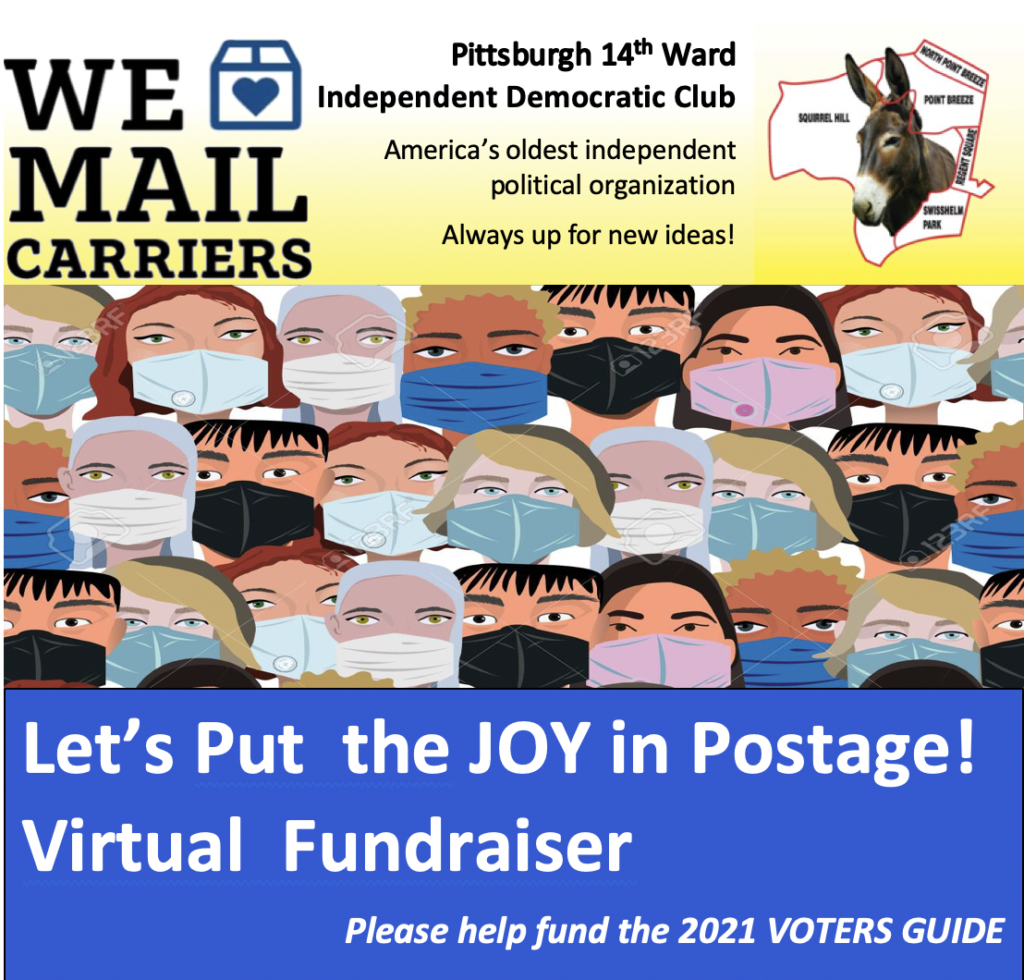 The 2021 ANNUAL MEETING was SUNDAY 31 JANUARY

This year’s Spring Primary affords us a unique opportunity: the ability to respond to the stark reality of social and racial injustice with our vote. With the candidates for Mayor, City Council, School Board, County Sheriff, Magisterial District Judge, and Common Pleas and Appellate Courts all on the ballot, it is time to view this election through the lens of Justice.

Members created a video high-lighting “Activities in the 14th Ward that Bend the Arc Towards Justice.”

Speakers included Marie Norman of the “Order of the Phoenix” organizing group, and David Harris and Jerry Dickinson of the University of Pittsburgh School of Law; followed by a panel presentation and discussion with Rep Summer Lee, Gwen’s Girls CEO Dr. Kathi Elliott, and Executive Director Jam Hammond of the City of Pittsburgh Commission on Human Relations.

To vote in the 2021 Primary Endorsement Election: members make sure we have your email address. For household memberships: one email per member of the household. Send them here.

MEET THE 2021 BOARD AND OFFICERS A question and answer session will follow.
CO-HOSTED by the Chatham University College Democrats IN CASE YOU MISSED IT, READ ABOUT IT HERE.   View the presentation here.

Speaker: The speaker for the Barbara Daly Danko Forum was David Hickton, the former United States Attorney for the Western District of Pennsylvania, nominated by former President Barack Obama, and the founding Director of the University of Pittsburgh Institute for Cyber Law, Policy, and Security. As US Attorney Hickton created a dedicated section in the U.S. Attorney’s Office to focus on cybercrime and national security. At the Institute for Cyber Law, Policy, and Security he established and co-chairs the Blue Ribbon Commission on Pennsylvania’s Election Security, an independent, bipartisan commission studying Pennsylvania’s election cybersecurity.

Topic: Election Security! As a battleground state, and one with outdated election infrastructure, systems, and technologies, Pennsylvania is a prime target for hackers wishing to disrupt the US electoral process. The Blue Ribbon Commission assessed the cybersecurity of Pennsylvania’s election architecture, including voting machines and election management systems, the voter registration system, and recovery and resilience in the event of a cyberattack or other technological failure. The commission recently published a report which will provide practical recommendations to state and local Pennsylvania officials to better secure the state’s elections and will serve as a model for similar efforts in other states. Copies of the report will be available to Forum attendees.

Club Elections: The 14WIDC also held elections for new Board Members. Please see this page for the newly elected Board and officers.